Dry, hot and arid landscapes like deserts and grasslands are rarely associated with any kind of life, let alone wild animals. In India, the Thar and Kutch deserts house a variety of ecosystems – from mangroves, saltpans and lagoons, to grasslands and dunes - but are often perceived as barren, lifeless places, where extreme temperatures make life difficult. And yet, a diversity of unique wildlife survives here, each species perfectly adapted to living in these regions.

Unfortunately, arid wildlife in India faces a plethora of challenges because of a lack of general and legal recognition for their habitat. Today, large scale allocation of this habitat for renewable energy expansion, and a steady influx of infrastructure for solar parks, wind turbines, and power lines continues to decimate this habitat, affecting endangered species.

In this blog, we focus on the critically endangered Great Indian Bustard, how the expansion of renewable energy infrastructure in its habitat affects the bird’s survival, as well as the work of our partners, The Corbett Foundation (TCF) in working towards conserving wildlife in this neglected habitat. 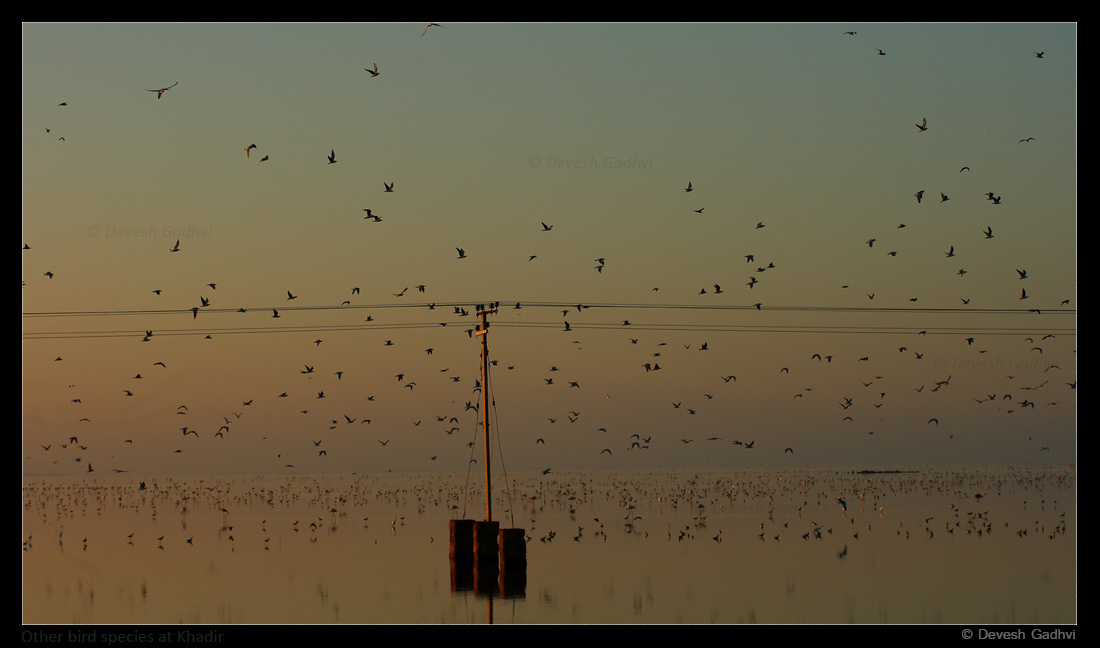 Birds pass through powerlines in wetlands of Kutch, Gujarat

Grasslands are one of the most fascinating and under-studied ecosystems in the world. While they are commonly thought of as dry, non-productive landscapes that are devoid of life, they support rich biodiversity that is uniquely adapted to the harsh conditions of desert and grassland biomes. The Thar desert of Rajasthan – which is the seventh largest desert in the world, is known to harbour 140 bird and 40+ mammalian species.

One of the most unique species found in this landscape is the Great Indian Bustard (GIB). A critically endangered bird, the GIB is concentrated in the arid landscapes of the Thar desert, Rajasthan, with a handful of birds surviving in the Kutch landscape of Gujarat- these are the last viable populations of these birds in India. They are native to arid grassland habitat, and with fewer than 150 birds remaining globally it is vital for their survival to take urgent steps to protect them. While the major drivers of their extinction have been widespread loss and degradation of their grassland habitat, in recent years they are threatened due to collision with overhead power lines that lay across the Thar landscape in Rajasthan and Gujarat.

Unfortunately, grasslands are more often than not ignored in legal policy and are classified as ‘revenue-wastelands’ in governmental records, leading to them being widely earmarked for developmental projects including wind and solar energy projects. The presence of such large-scale renewable energy projects and associated infrastructure (which includes power transmission lines, solar panels, wind farms) is one of the biggest threats to the GIB and other important bird species like the Lesser-Florican, MacQueen’s Bustard and other avian species native to this region. A 2018 study by the Wildlife Institute of India (WII) reports that 100,000 birds die each year due to power line collisions, and estimates that 18 GIB die each year due to collision with power lines, making power lines the most significant current threat to GIB.

The situation is particularly precarious because GIBs reproduce once a year and lay eggs on the ground, thus under high risk from predators and feral dogs. They also have poor frontal vision rendering them incapable of viewing the mesh of wires that line their grassland habitat. The large-scale transformation of their habitat, combined with their low reproductive rate has pushed this bird to the very brink of extinction. 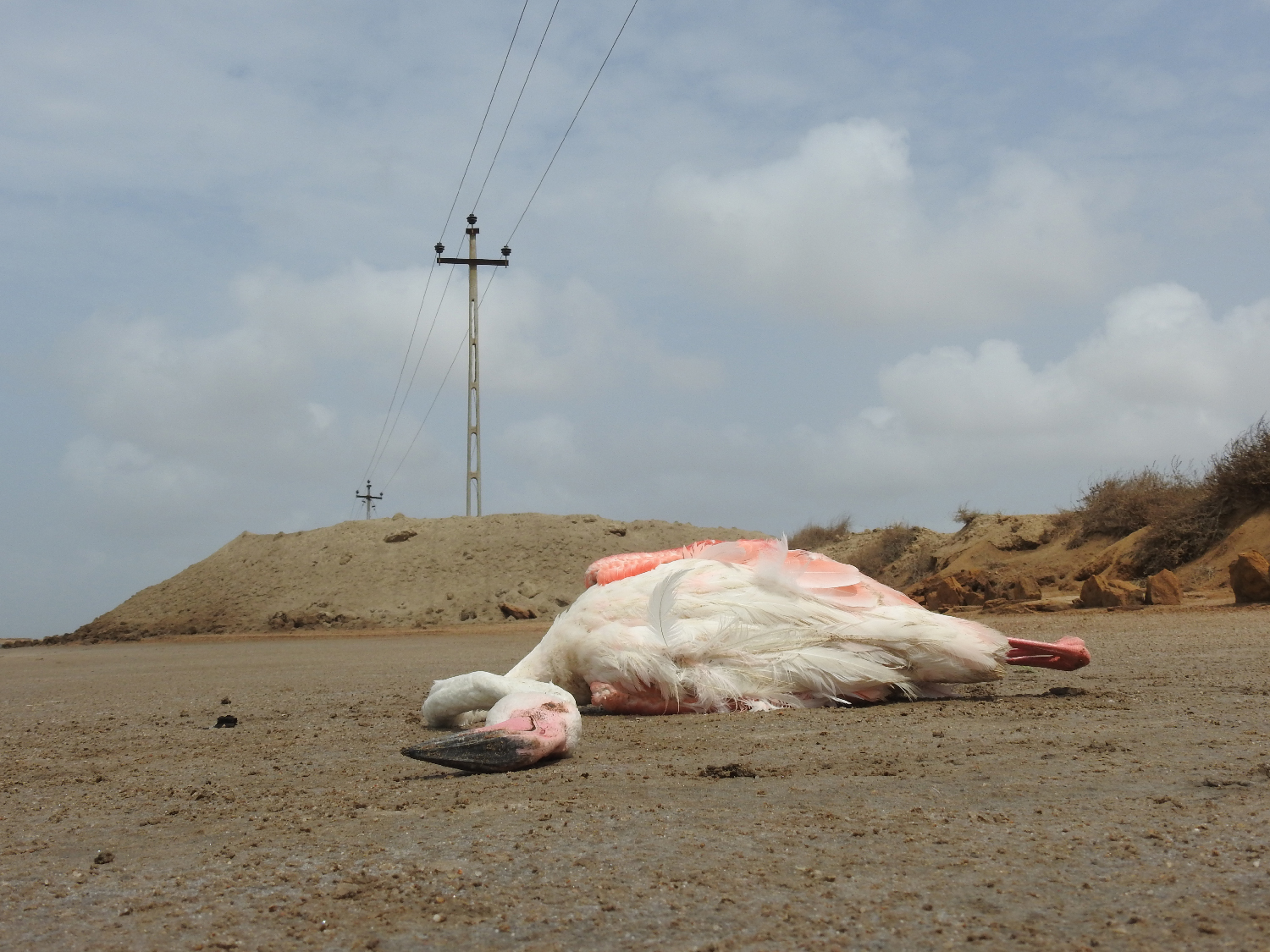 A Greater flamingo dead in Abdasa Taluka, Kutch, due to collision with powerlines.

The case of Green Energy

India has an ambitious national target of achieving about 450 gigawatts of installed renewable energy capacity by 2030, of which 280 GW (over 60 percent) – would come from solar power. The grasslands of Thar and Kutch have been widely allocated for solar and wind expansion due to the lacuna of a national policy recognising them as important ecosystems. It is undoubtedly crucial to expand our capacity of renewable energy, but the impact of this expansion on the unique and threatened biodiversity of Thar and Kutch needs serious consideration.

Acknowledging the threat to birds especially the GIB, a Supreme Court judgment in M. K. Ranjitsinh vs Union of India (W.P 838 of 2019), dated 19th April 2021 directed the governments of Gujarat and Rajasthan to lay high voltage power lines underground in GIB habitats. It added that until the lines are made underground, bird-diverters must be installed on all lines immediately.

The Court had added that while the lines should be taken underground immediately, a time limit of one year since the day of the order for power was allowed for companies to complete the undergrounding. It stressed that irrespective of the cost, the priority should be to conserve birds that are near-extinct.

However, unfortunately it has been observed that power companies in the region have not complied to the order. In a joint press release, the Bombay Natural History Society and The Corbett Foundation noted that despite the SC order, power companies have not complied with the SC Guidelines and work on the expansion continues with no bird diverters fitted either. Kedar Gore, Director of TCF adds, “This disobedience amounts to contempt of court. New renewable energy parks have been planned in Gujarat, Rajasthan, Maharashtra and other states.”

Bustards not a hurdle to Green Energy

In addition to this non-compliance, a false narrative has also been created around this order implying that the SC wholly opposes Green Energy, and that the GIB is a ‘hurdle’ to green energy expansion. This is not the case, and the SC order clearly specifies that the need of the hour is to protect wildlife by laying all new power lines underground and by adding diverters on existing lines at least until they are moved underground. This directive ensures that green energy does not hamper the rich biodiversity present in the region and places the onus on power companies to ensure their practices do not harm wildlife.

How green is Green Energy?

The primary argument behind expanding infrastructure for renewables is that it is critical to switch from fossil fuel reliance towards cleaner energy, and in pursuit of UN’s Sustainable Development Goals for the planet. However, it is problematic that this framework considers the UN’s Sustainable Development Goals in silos. While green energy helps attaining SDGs related to climate mitigation and clean energy (SDG 7 & 13), in this case its expansion also negatively impacts SDGs for preservation of life on land and below water (SDG 14 & 15). This does not acknowledge the value of biodiversity and nature for earth systems. In the process of pursuing wind energy expansion, it is critical for power companies to consider the environmental and social costs of the large-scale infrastructural expansion associated with solar and wind expansion.

Relevant here is a 2011 study by the World Bank titled  ‘Greening The Wind: Environmental and Social Considerations for Wind Power Development’. The study addresses key environmental and social considerations associated with wind power development, and offers technical advice for those working on expansion of renewables - to ensure that wind power projects function in a manner consistent with existing international benchmarks like World Bank Safeguard Policies and International Finance Corporation (IFC) Performance Standards.

One critical point addressed in the study is the importance of site selection in pursuing the expansion of wind energy. It mentions, “Careful site selection of wind power infrastructure is often the most important measure in managing the biodiversity and other environmental impacts of wind projects. To a very considerable degree, site selection can predetermine the biodiversity-related impacts, as well as extent to which follow-up mitigation measures might be effective.”

Furthermore, the study classifies several habitats as ‘Higher-Risk Sites’ where expansion of renewables can seriously impact biodiversity. These sites include, among others, National Parks; Native Grasslands; Critical Natural Habitats (areas that are considered important for the survival of endangered, rare, vulnerable or migratory species); Wildlife Migration Corridors, and Shorelines (as they tend to have concentrated bird populations and thus inherently tend to be higher-risk sites for wind turbines).

The Thar and Kutch landscapes are, as previously mentioned, important areas from the perspective of bird conservation, and harbour several species of migratory and native grassland birds. It is thus critical for power companies to ensure they meet these international standards to ensure that wind power infrastructure is not harmful to biodiversity.

We are proud to support the work of our partners, The Corbett Foundation, who are working in Kutch to conserve the handful of GIB remaining here. TCF received THT’s Strategic Partnership Grant in 2020, and with its support they have install bird diverters in critical bird areas of the Abdasa Taluka in Kutch, which is the last of hold of Gujarat’s GIBs and other grassland birds. In August 2021, TCF completed installing ~800 bird-diverters on two power-lines. Four types of diverters have been installed on one 11 kV and one 66 kV power-line, passing through important bird habitats in Kutch, Gujarat.

A collaborative study between TCF and Wildlife Institute of India (unpublished) found that a staggering number of ~30,000 birds die annually due to power-line collision in Abdasa taluka of Kutch. The team worked on identifying the power-lines responsible for the high mortality of different bird species and installed bird diverters on them. They acknowledge the support extended by Kutch (West) Division of Gujarat Forest Department, Archean Group of Salt Pans - Jakhau, GETCO and PGVCL for support in installation of bird diverters.

As a part of this project, TCF is also working with local villagers to encourage rotational grazing by restoring community grazing lands thus taking pressure away from natural grasslands in priority habitats for GIB and Lesser Floricans. The aim is for these grasslands to become grazing free, and thus become safe breeding grounds for ground-nesting birds.

TCF also expanded their ongoing Wildlife Friendly Agriculture Arc (WFAA) Program, which aims to restore degraded grasslands in GIB priority areas, while supporting the farmers in getting a fair price for organic produce, and using bio-pesticides instead of pesticides. Through the grant, TCF has worked on providing farmers with bio-pesticides and seeds.

Kedar Gore, Director of The Corbett Foundation summarises: "With fewer than 150 Great Indian Bustards surviving in the wild in India, it calls for extraordinary measures to be adopted with utmost urgency to prevent the extinction of this species. It is proven beyond any doubt that bustards die due to collision with power lines, not only in India but also abroad where other bustard species exist. This has emerged as one of the topmost threats to the long-term survival of these critically endangered birds. On April 19th, the Hon'ble Supreme Court of India passed an order to make underground the power lines in priority and potential Bustard areas while hearing a PIL. We are hopeful that India will prove to the world that it can bring back these magnificent and heaviest flying birds of Indian grasslands from the brink of extinction."

As India moves ahead with rapid expansion of wind and solar energy infrastructure, it is essential to ensure that species on the brink of extinction are not compromised, and the preservation of their grassland habitat is prioritised. To be truly green, power companies must comply with the SC order and ensure that power lines in the Thar and Kutch landscape are taken underground at the earliest, and no further expansion of renewable infrastructure takes place in critical grassland habitats.