As a diving instructor, Nayantara Jain spent years introducing visitors and tourists in the Andaman Islands and the Lakshadweep to the wonders of the ocean beneath. Soon enough, an internal resolve compelled her to switch gears into working full-time for marine research & conservation.

Today, she is the Executive Director of the not-for-profit Reefwatch Marine Conservation, who received our Lesser-known Habitats Grant in 2018, and work on research, education and outreach for one of the world’s most threatened and fragile habitats – coral reefs. We caught up with her to learn about what led to this move, and what drives her to conserve these fragile ecosystems.

The Habitats Trust (THT) team: Nayantara, you worked as a scuba instructor for years in the Andaman and Lakshadweep Islands, before immersing yourself in the world of marine conservation. What experiences led you to this decision?

Nayantara Jain: As an instructor, I was diving through the same reefs for several days, months or even years, in a row. Before this, issues like climate change, pollution, overfishing were issues I was conceptually aware of and cared about, but this wasn’t real to me yet. But diving every day, really seeing first-hand how these spaces were changing largely due to human activities, that is what really made global warming and sea level rise very real to me, and very personal. The sea was almost like my home.

Things changed in 2010, when the El Nino occurred and suddenly water temperatures went up by 2-3°C, and I saw entire stretches of reefs that were really alive and vibrant transform before me within a couple of weeks. This had a strong impact on me and started my journey towards studying conservation. I realised that this is what I wanted to do with my life, working to study and conserve these spaces in a very active way.

In order to do it I recognised I needed academic training because my undergraduate was in philosophy, which is not really science based, and so I pursued a course in marine biology.

THT team: What are three crucial facts about Indian reefs that every citizen should know?

Nayantara: Firstly, people should know we have them! Most of us don’t realise this, and think that to dive or see coral reefs you have to go to the Great Barrier Reefs of Australia or the Maldives, but we have fantastic reefs in India – expansive corals under clear blue water in Lakshadweep and Andamans islands, and diverse reef systems even on the mainland, all along Karnataka coast and Maharashtra, the Gulf of Kutch, the Gulf of Mannar.

Second, whether or not you ever end up seeing a reef, everybody’s actions on the mainland have a huge impact on these ecosystems. Wherever you are in the world, your consumption of fossil fuels adds to the problem that reefs face. Even everyday things like what kind of sand is used in construction or building houses, a lot of the material comes from illegal extraction in reefs.

Lastly, everyone should know how diverse reefs are! These are incredible, precious ecosystems that form less than 0.1% of the world’s oceans floor, are yet are home to a third of all marine life. Imagine the density of life in these spaces! It makes them special and beautiful, but also critical.

THT team: Recently marine scientists have been raising alarms about large-scale coral ‘bleaching’. Can you tell us a little about this phenomenon?

Nayantara: Corals reefs exist because of a symbiotic relationship between a jellyfish like animal called a polyp, and the pigmented algae that live inside them (and provide reefs their colour) called zooxanthellae. This symbiosis is important, as the zooxanthellae use sunlight to conduct photosynthesis, providing energy to the polyps they live in. It’s like having your own sun farm inside your body! But the relationship breaks down if water temperature rises above a certain threshold, which could be anywhere between 28-32°C. Above this, the polyp ejects the zooxanthellae cells in the body so coral go white, losing their colour. That’s why it’s called bleaching. 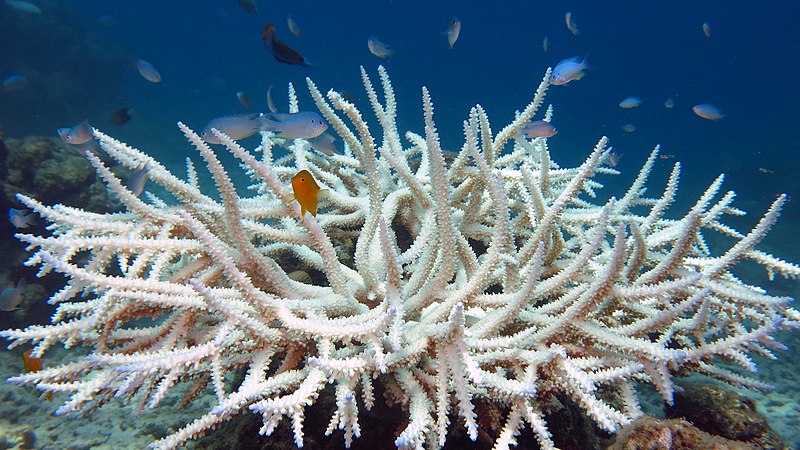 This phenomenon is extremely worrying because 80% of a coral’s energy requirement is fulfilled from zooxanthellae. If the cells are ejected due to rising temperatures, the coral has to survive on only 20% of its energy budget. Bleaching doesn’t always kill the coral, but it essentially puts them on a starvation diet that can result in die-offs. Globally, it is estimated about 20% of the world’s coral reefs are dead and a further 20% are at great risk of dying. That’s 40% of a habitat that is already a tiny part of the sea being dead or highly threatened. In India, some studies in the Andamans show that in the span of 20-30 years we’ve gone from 75% of ours reefs to only about 30-35% surviving today.

THT team: How does Reefwatch work on creating awareness for these fragile ecosystems?

Nayantara: Our outreach activities focus on showcasing Indian ocean life, as often people seem to think that life underwater only exists in other places, while we have just seas and nothing underneath them! Since most people haven’t experienced corals, we try to create a personal connection to highlight the plight of these ecosystems. We do free school programs for local and underprivileged children, and also a lot of interactive exercises in the mangroves and beaches here in the Andamans, in a hands-on way instead of in closed classrooms. We also try to conduct these for schools on the mainland.

We focus on showcasing media, films and videos that show the marine life locally found in India. Additionally, we launched the country’s first underwater imagery competition to encourage Indians to explore the sea. We also keep our base open, and encourage visitors from all walks of life.

THT team: Your team has also been researching the unique phenomenon called ‘coral spawning’. Could you tell us a little about this?

Nayantara: Coral spawning is really a fascinating phenomenon. Corals are these clonal organisms that can reproduce both sexually and asexually. Asexually, they reproduce by budding, where small pieces can break off and grow into an entirely new coral because they have the ability to clone. The coral will have the same DNA as the parent coral. In our restoration work too, we dive, find broken coral fragments that may be broken because of anything from a fish, an anchor or a storm, and before it dies we regrow it into another coral.

But to maintain genetic diversity, corals reproduce sexually. Once a year they release these pink, floaty bundles of egg and sperm in the water – it’s a stunning sight. This is an annual event that occurs for just 10-15 minutes, and only happens at night. Blink and you miss it! And it’s a different day and time all over the world, because they operate on different cues like pressure, temperature, etc. It starts with one coral, and then nearby corals of the same species follow at the same time to fertilise. It is a highly coordinated and incredible event. 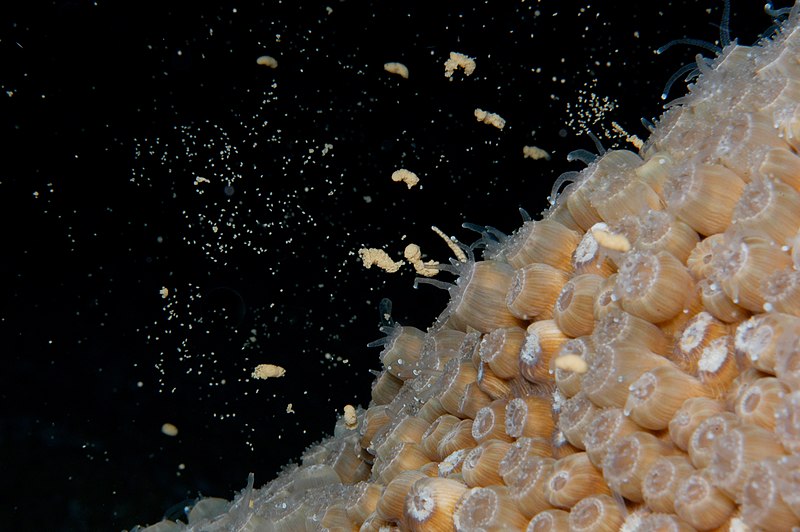 In other parts of the world they know when it happens because there have been many years of research abroad. But in India, not much is known about when it happens.

We’re trying to study it as this can be used for conservation in India too. Since corals are broadcast spawners, these floating pink sacs sometimes drift away and get wasted. But if we know when they are spawning, it is possible to identify a healthy coral colony, collect sperm and fertilise it in a centrifuge, to then grow it on small cement buttons, and transplant those to a real reef. It then creates many more baby corals. Following this, one can start exploring ways to grow more resilient corals, perhaps ones that have survived bleaching, etc. so they’re genetically more robust and resistant to disease and warming.

THT team: What are some challenges faced in undertaking and sustaining work on coral conservation?

Nayantara: Firstly, there are administrative hurdles. Getting permits and approvals for various government permissions are all long, laborious and very frustrating tasks. There’s also the technology and know-how that is still relatively new in India. Not a lot of people are doing restoration, and even fewer are doing it from a conservation perspective where the scale is small, but funds needed are much greater.

Additionally, sometimes the existing techniques have been tried abroad so they are not based on local realities and conditions, like the fish found here and habitat conditions, so reaching out to people and getting help can take time. Also, showing progress is tough, as corals grow very slowly and physically showing the result of the expensive investment is hard. You need a boat, fuel, scuba equipment, diving equipment, all of which is expensive and then to show growth of 3cm, people often don’t feel that it’s worth it. 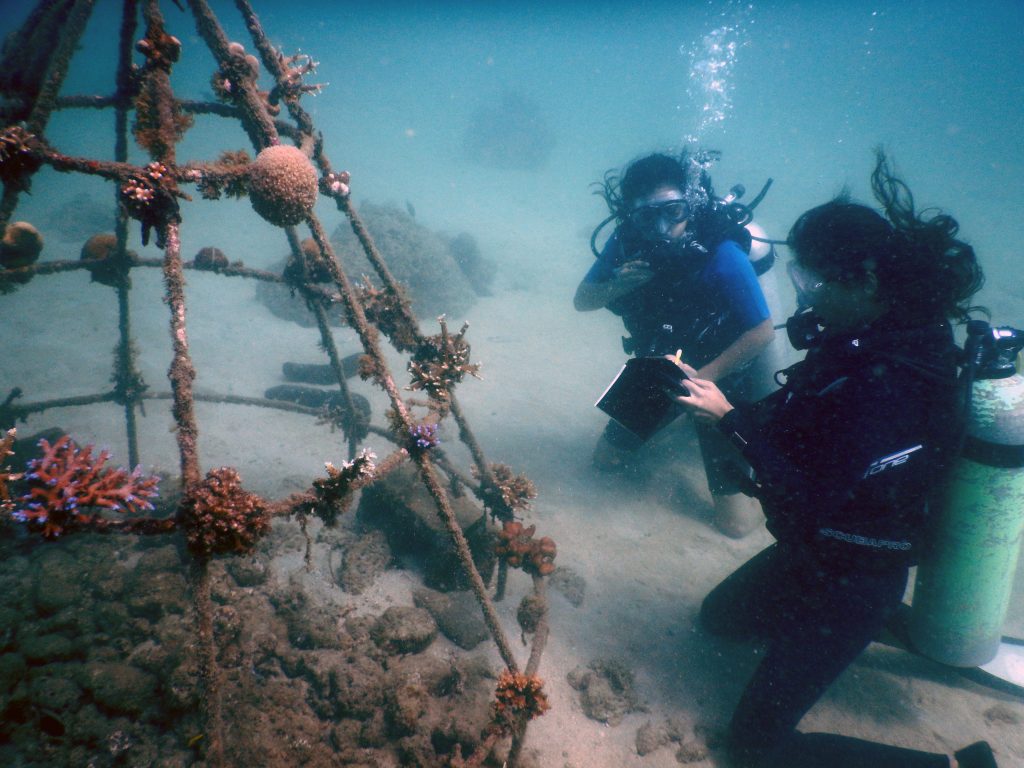 However, despite these challenges I think it would help tremendously if marine conservationists also talked about the failures they have faced more openly. We work in an already challenging field with various constraints, so if we could be more open about our mistakes and missteps, others could learn from this.

THT team: What is your advice for citizens and young people who want to contribute to coral reef conservation?

Nayantara: If you are keen on coral reef conservation, definitely learn how to dive, and also use your time and skills to assist organisations working for the work you believe in. Not everyone can dive, but you can contribute with your skills from exactly where you are. We have young illustrators who are very passionate about corals who do illustrations and charts for our manuals and books. I really do think apart from scientists, people from all backgrounds like designers, writers, content creators, video creators, app developers, can make a difference. Those kind of things are really helpful for conservation organisations, because every rupee that they spend counts and they may not be able to fund this kind of work. You can also donate to organisations, no matter how large or small your donation might be.

And then there are the everyday things that we already know about. Consume less, and do so more consciously, reduce your carbon footprint, reduce usage of single use plastic, as that really makes a difference for all ecosystems – whether it is coral reefs or forests.

THT team: We would love to hear about a memorable encounter with marine wildlife or habitats that left a lasting mark on you.

Nayantara: When I finished my master’s degree in marine biology, I got an opportunity to go to Galapagos Islands. The biology and evolutionary history of this region is very exciting. So just going there and getting to dive, it was some of the most spectacular diving I have ever done in my life. The reefs were gorgeous, and we had about 300-400 hammerheads all around us!

Similarly, until this point I had done most of my diving in India but later I got to dive in the ‘coral triangle’, which is an area of the sea that has the healthiest corals in the world. I went diving in the Komodo Islands of Indonesia, which is a part of the triangle. It was a gorgeous reef, but this is also where I learned what a truly healthy diver’s reef looks like. I realised that the ones I had seen in India may have looked this way many years back!